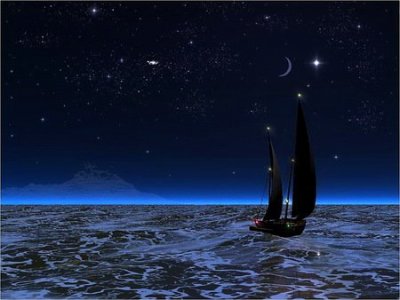 People who visit you in Bermuda are likely to notice, even before they notice the flowers of the island, the scores of sailing craft which fleck the harbors and the ocean round about. Furthermore, they are likely to ask you about the ships before they ask you about the flowers, and this, at least in my own case, is unfortunate, because although I know practically nothing about flowers, I know ten times as much about flowers as I know about ships. (continued) -
Question #1
Do you have a better knowledge of flowers or sailing ships?
Or at any rate, I did before I began to study up on the subject. Now I feel that I am pretty well qualified to hold my own in an average discussion of rigging.

I began to brush up on the mysteries of sailing a boat after an unfortunate evening when a lady who sat next to me at dinner turned to me and said, "Do you reef in your gaff-topsails when you are close-hauled or do you let go the mizzen-top bowlines and cross-jack braces?" She took me for a sailor and not a landlubber, and of course I hadn't the slightest idea what she was talking about. (continued)
Question #2
Would you rather be a land lubber or a sailor ?

One reason for this was that none of the principal words (except reef) used in the sentence I have quoted is pronounced the way it is spelled: gaff-topsails is pronounced "gassles," close-hauled is pronounced "cold," mizzen-top bowlines is pronounced "mittens," and cross jack braces is pronounced "crabapples" or something that sounds a whole lot like it. Thus, what the lady really said to me was, "Do you reef in your gassels when you are cold or do you let go the mittens and crabapples?
Question #3
So would you like to learn to "Talk like a Sailor" or just sail like one?

The above encouragements to "talk like a sailor" were taken from James Thurber's "The Story of Sailing."